Probe Of Hope Reached Mars by Led of Emirates

The Arabs reached Mars on the 9th of February for the first time in history after the “probe of hope” approached entering the capture orbit around the red planet. As part of the first Arab mission to explore planets led by the UAE.

The Hope Probe reached the capture orbit around Mars. After it has traveled in deep space at an average speed of 121,000 kilometers per hour. For about seven months, since its launch from the Tanagashima space base in Japan on July 20, 2020. Cutting about 493 million kilometers.

There was a live broadcast of the event at 7 pm UAE time. Transmitted by television stations, websites, and social media platforms, through the link of the event. 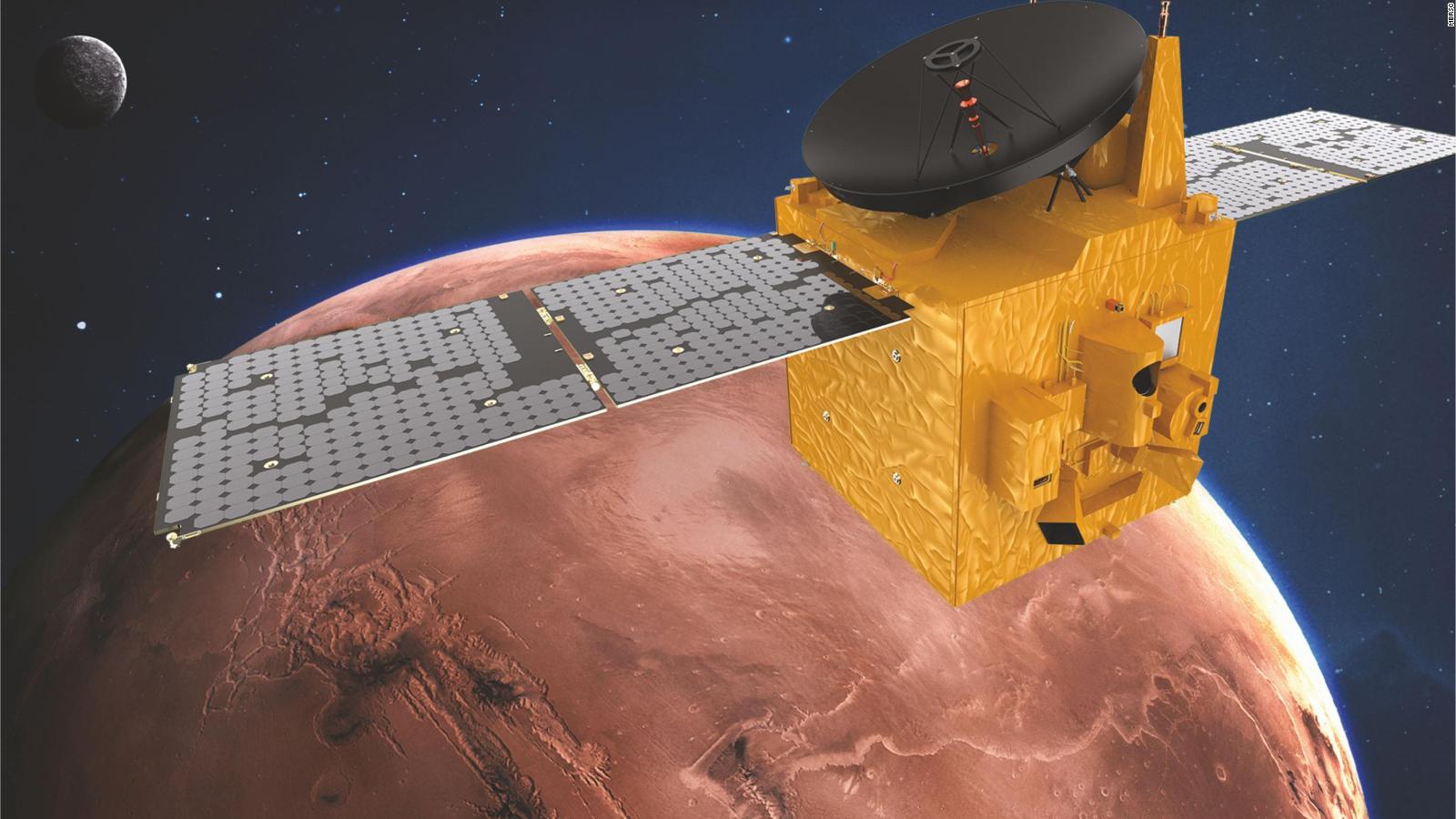 New Journey of the Probe Of Hope

The Hope Probe, upon entering the capture orbit around Mars after hours. Is waiting for one of the most difficult challenges it has faced since its birth. As an idea in the ministerial retreat of the UAE government in 2014. Before the idea crystallized into a strategic plan and a giant scientific project with unprecedented goals in human history. Under the name of the Emirates Mars Exploration Project.

During the critical minutes before arriving, the call was late to the control center. At the ground station in Al Khawaneej in Dubai. And he must perform this process on his own. And he must also overcome the challenges he may face during these minutes. That will determine the fate of the seven years that the project team spent working diligently. And perseverance in designing, developing, building, and programming the probe. So that it is ready to meet this challenge and overcome these 27 blind minutes. As it did with the challenges it faced throughout its Martian journey.

Challenges facing the Probe of Hope

The difficulty of this stage increases in the fact that communication will be delayed between the control center and the probe. Hence the name of these 27 minutes as “blind”, like the probe, without human intervention, will deal with all its challenges during this period in an autonomous manner. And in the event of any technical failures in more than Two reversible thrusters that the probe uses to slow down. This will cause the probe to become lost in deep space or shatter, and in either case, it cannot be recovered.

If the UAE succeeds in reaching Mars from the first attempt. The country will have achieved a global achievement that exceeds the success rate of reaching the orbit of the Red Planet. which historically does not exceed 50%.

Millions of people in the UAE, the Arab world, the Islamic world, and the scientific community around the world are turning to the “Hope Probe”. As part of the Emirates Project to explore Mars. Which is a few hours away from achieving an unprecedented historic achievement in the history of the region. Amid a state of anticipation and waiting for the fate of this mission that It carries with it the hopes and aspirations of the people. Of more than 56 Arab and Islamic countries to reach the orbit of the Red Planet for the first time. 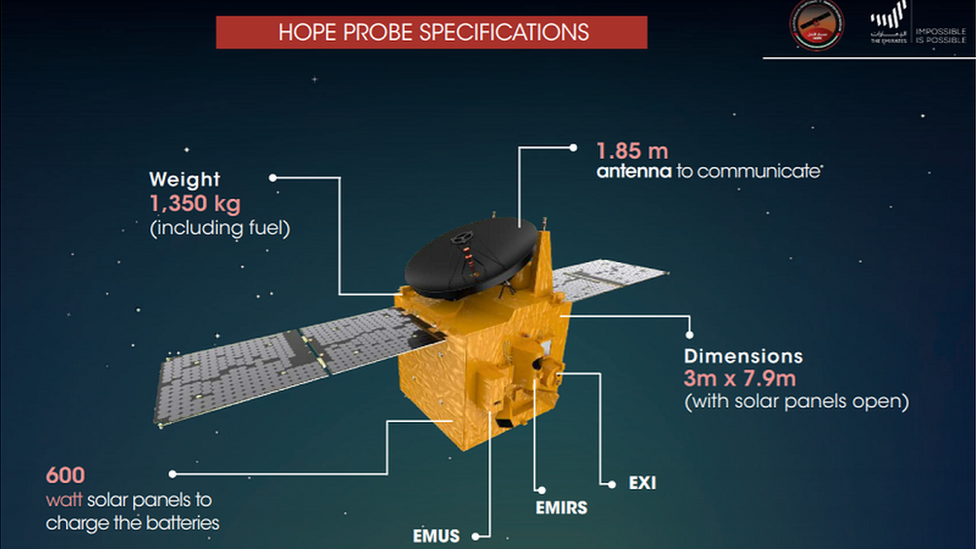 Upon entering the “Hope Probe” into the capture orbit. And the success of the Emirates Project to explore Mars team. In contact with the probe through the Ground Control Center in Al Khawaneej. Dubai will be a point of contact between the Earth and Mars over the course of a full Martian year that extends to 687 days with Earth’s calculations.

Sending commands and receiving coordinates from the probe until it safely reaches the scientific orbit and then to the scientific stage. And after making sure that all things are going according to what the team has planned. Communication with the probe will be two to three times a week. And the duration of each contact window is from six to eight hours a day. Noting that the delay in contacting due to the distance ranges between 11 and 22 minutes, in order to send orders to the probe and its scientific apparatus and to receive the scientific data it collects.

The Minister of State for Advanced Technology and Chairman of the Board of Directors of the Emirates Space Agency Sarah Bint Youssef Al-Amiri confirmed that the success of the “Hope Probe” in reaching the orbit of Mars – if it surpasses the expected challenges – will be an unprecedented Arab and Emirati achievement, as it is the focus of the hopes of hundreds of millions out of 56 Country (Arab and Islamic). It is an ambitious project to record an honorable Arab and international scientific and research presence in the field of planetary exploration, as a translation of the vision, directives, and ambitions of the country’s leadership.

She said that the UAE project to explore Mars, “the Probe of Hope,” has succeeded par excellence in spreading the culture of hope and the impossible among the sons and daughters of the UAE until it became a thought, action, and a process. 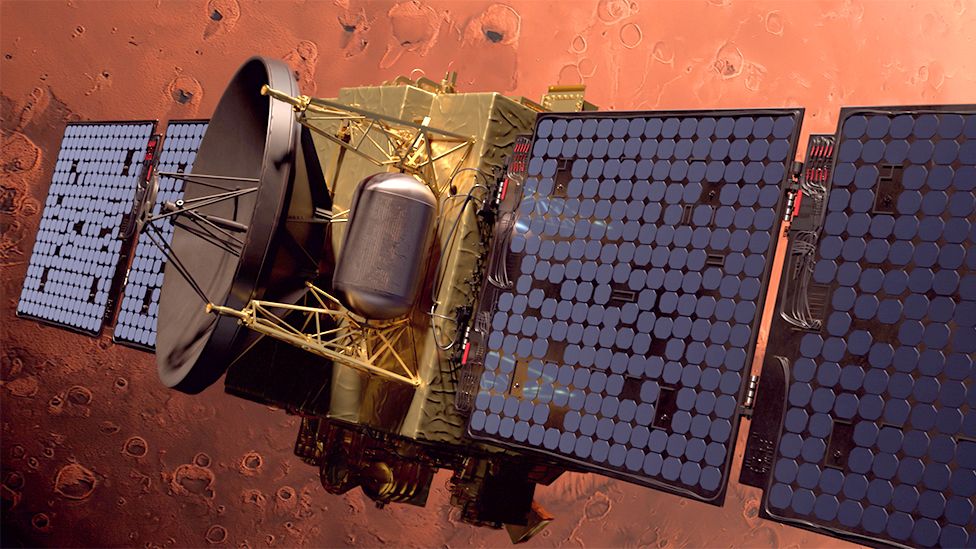 The Minister of the state also explained that despite the four space flights that managed to reach the Red Planet, before the “Hope Probe”, as well as the studies that have been conducted on Mars, mankind still knows little about it, especially with regard to its climate. Emirates to explore Mars.

About Temporary Suspension in Dubai